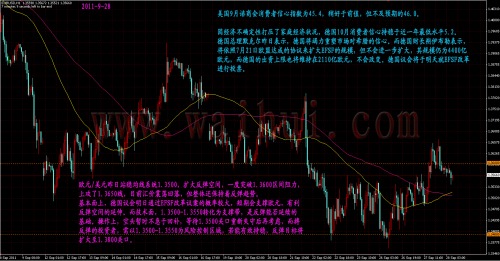 The US consumer confidence index for the September Consultative Conference was 45.4, slightly better than the previous value, but less than the expected 46.0.

Due to the economic uncertainty that weighed on the family's economic conditions, German consumer confidence in October held steady at the lowest level in the past year of 5.2. German Chancellor Angela Merkel said yesterday that Germany will try to reshape the marketâ€™s confidence in Greece. The German Finance Minister SchÃ¤uble said that the scale of the EFSF will be expanded in accordance with the agreement reached by the EU on July 21st, but it will not be further expanded. Its scale is still 440 billion euros, and Germanyâ€™s capital contribution ceiling will also be maintained at 2110. Billion euros will not change. The German parliament will vote on the EFSF reform tomorrow.

The EUR/USD stabilized its 1.3500 average system yesterday, expanding the rebound space, once breaking the 1.3600 range resistance and upping the 1.3650 line. The current exchange rate has oscillated and declined, but the overall trend has maintained a rebound.

On the fundamentals, the probability of the German parliament passing the EFSF reform bill tomorrow is greater, and it will support the euro in the short-term, which will facilitate the extension of the rebound space. On the technical side, conversion of 1.3500-1.3550 into a support zone is the basis for the continuation of the rebound. In operation, the short-term is not in a hurry to cover, wait for the 1.3500 mark to fall back to be considered again, and the investors who have bounced back need to use 1.3500-1.3550 as the risk control area. If they can effectively stabilize, the rebound target will expand to the 1.3800 mark.